Four Years Later: The Kennebunkport Warning of August 2007 Confirmed by Dick Cheney in his New Autobiography

This week marks the fourth anniversary of the Kennebunkport Warning, whose text the reader will find elsewhere on the Tarpley.net web site, together with related documentation. The Kennebunkport Warning of late August 2007 sought to prevent a false flag terror operation designed by the US-UK rogue network to facilitate an attack on Iran and/or Syria. Today, four years later, world events have come full circle, and we must once again be on guard for a new and wider war in the same region. This might take the form of an attack by Turkey on Syria, organized in advance with the NATO command and occurring under the cover story of events inside Syria, where an uprising of armed commandos of the Moslem Brotherhood now appears to have been largely quelled by the Syrian Army.

In order to attack Syria without being portrayed as an aggressor, Turkey will need a better pretext. Given the traditions of NATO, it is likely that an attempt will be made to furnish such a pretext in the form of a false flag terror event inside Turkey to be blamed on Syria or Hezbollah, or in the form of an staged Gulf of Tonkin incident to permit the charge that Syria attacked Turkey first. Or, a large massacre of Moslem Brotherhood supporters inside Syria could be carried out in reality or merely simulated on a Hollywood set in Doha, Qatar, to motivate an invasion based on humanitarian grounds.


Cheney’s June 2007 Demand for an Attack on Syria 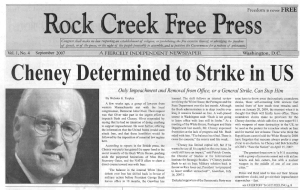 Former US Vice President Dick Cheney is about to publish his autobiography, In My Time. Here, according to pre-publication press accounts, Cheney describes his June 2007 attempt to convince Bush to launch a bombing attack on Syria over the alleged Syrian nuclear program. Cheney says that he raised the issue, apparently at a meeting of the National Security Council. Bush asked if there was any support for the idea, and there was none. So, Cheney’s attempt to launch the attack on Syria by way of legal and institutional channels failed.

Cheney does not relate in his book what happened then. The US rogue network (variously referred to as invisible government, secret government, parallel government, or deep state – of which Cheney is a spokesman, operative, or appendage), having been rebuffed by the legal government in the form of the Bush NSC, characteristically sought to carry out the desired attack anyway, by illegal means.

It was around July 21, 2007 that I posted on the internet an article entitled “Cheney Determined to Strike in US.” This article became the headline story on the front page of the Rock Creek Free Press, and was thus widely distributed in boxes all over Washington DC, especially around Metro stations.
During August 2007, “Cheney Determined to Strike in US” was a very accurate description of the central political reality. This is what Cheney has now confirmed for us in his autobiography.


The Rogue B-52, Hijacked by the Parallel Government

Rogue network personnel embedded in the US Air Force hijacked a US Air Force B-52 intercontinental strategic bomber equipped with six nuclear-armed cruise missiles and flew it from Minot AFB in Colorado to Barksdale AFB in Louisiana, the latter being the main point of departure for US flights to the Middle East. This flight was made totally outside of the command and control procedures of the US Air Force; it was an invisible government operation. It is clear that this rogue B-52 was intended to join the Israeli attack on Syria, which did in fact occur at the end of the first week of September, 2007.

Fortunately, the flight of this hijacked rogue B-52 towards the Middle East was blocked on the runway at Barksdale. This was done partly by rival intelligence factions, whose clash enveloped official Washington in a test of wills. In the end, the neocon faction was defeated, and the Brzezinski faction gained the upper hand.

In the background, it is entirely possible that the Kennebunkport Warning, for which signatures had been organized by Bruce Marshall and others, was on its way to being posted on over 110,000 websites, contributed something to blocking the flight of the rogue B-52.

In the wake of these events, a number of individuals and web sites in the 9/11 truth movement outdid themselves in condemning not the faction behind Cheney, but rather the Kennebunkport Warning and its supporters. They should have been agitating for an immediate investigation of the rogue B-52, which might have exposed some of the tentacles of the rogue network, which has remained more or less untouched. By their actions, these individuals and web sites helped usher in the substantial collapse of the 9/11 truth movement, which largely fell apart during 2008 and 2009.

The following summary of issues around the Kennebunkport Warning, written in October 2007, sums up the lessons of these events. END_OF_DOCUMENT_TOKEN_TO_BE_REPLACED
Posted by Dr. J. P. Hubert at 5:36 PM 1 comment: