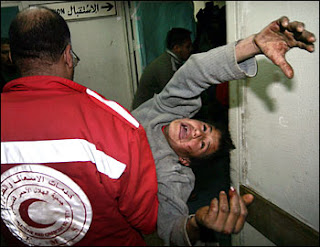 JERUSALEM, Jan. 8 -- The International Committee of the Red Cross said Thursday that it had found at least 15 bodies and several children -- emaciated but alive -- in a row of shattered houses in the Gaza Strip and accused the Israeli military of preventing ambulances from reaching the site for four days.

Red Cross officials said rescue crews had received specific reports of casualties in the houses and had been trying since Saturday to send ambulances to the area, located in Zaytoun, a neighborhood south of Gaza City. They said the Israeli military did not grant permission until Wednesday afternoon.

In an unusual public statement issued by its Geneva headquarters, the Red Cross called the episode "unacceptable" and said the Israeli military had "failed to meet its obligation under international humanitarian law to care for and evacuate the wounded."

When rescue workers from the Red Cross and the Palestinian Red Crescent arrived at the site, they found 12 corpses lying on mattresses in one home, along with four young children lying next to their dead mothers, the Red Cross said. The children were too weak to stand and were rushed to a hospital, the agency said.

A spokesman for the Israel Defense Forces declined to comment early Thursday on the specific allegations made by the Red Cross but said in a statement that the military "has demonstrated its willingness to abort operations to save civilian lives and to risk injury in order to assist innocent civilians."

"Any serious allegations made against the IDF's conduct will need to be investigated properly, once such a complaint is received formally," the statement added.

The deaths came to light as Israel continued a military offensive against the Islamist group Hamas in the Gaza Strip.

Early Thursday, Israeli officials reported a number of explosions in northern Israel and said they were caused by rockets fired from southern Lebanon.

An Israeli military spokesman said that several rockets had been fired from Lebanon about 7:30 a.m. and that they had landed in western Galilee. One man was lightly wounded. The spokesman said the military returned fire into southern Lebanon, targeting the rocket-launching site.

Officials in Galilee said the rockets -- the first fired into Israel from southern Lebanon since the end of the 2006 war with the Shiite Muslim movement Hezbollah -- landed around the city of Nahariya.

There was no immediate comment from within Lebanon. Hezbollah leader Hasan Nasrallah has threatened Israel with retaliation for its offensive in Gaza.

In the Zaytoun incident, the Red Cross said its workers evacuated 18 wounded survivors from the houses in donkey carts. They said ambulances could not reach the site because of earthen barriers erected around the neighborhood by the Israeli military. Red Cross officials said that Israeli soldiers posted nearby tried to chase rescue workers away from the site but that the rescuers refused to leave.

This is a shocking incident," Pierre Wettach, the Red Cross's head of delegation for Israel and the Palestinian territories, said in a statement. "The Israeli military must have been aware of the situation but did not assist the wounded. Neither did they make it possible for us or the Palestine Red Crescent to assist the wounded."

The Geneva Conventions provide that parties to a conflict "at all times" should "without delay" take "all possible measures to search for and collect the wounded and sick, to protect them against pillage and ill-treatment, to ensure their adequate care, and to search for the dead and prevent their being despoiled." The conventions also say that wounded "shall not willfully be left without medical assistance and care."

The Red Cross said it was able to remove only three of the bodies and had received reports of other casualties in the neighborhood. The agency said that it was trying to return to the site but that negotiations with the Israeli military to guarantee safe passage were ongoing.

Palestinian journalists confirmed that large numbers of wounded survivors, including children, had arrived at Red Cross hospitals in Gaza from Zaytoun on Wednesday. Other details could not be independently corroborated; the Israeli military has barred foreign journalists from entering Gaza.

There have been other reports of wounded Gazans who have been forced to wait many hours or even days for ambulances since the Israeli offensive began Dec. 27, including several in the Zaytoun neighborhood.

Meanwhile, Israel said Wednesday it was in "fundamental agreement" with a cease-fire proposal offered by Egypt and France, but fighting continued in the Gaza Strip as diplomats from more than a dozen countries haggled over details in a bid to stop the conflict.

Israeli officials said they would send emissaries to Egypt on Thursday to hold talks on a potential truce proposed by Egyptian President Hosni Mubarak and French President Nicolas Sarkozy. Parallel diplomatic efforts were underway in New York at the United Nations. But many sticking points remained. The French-Egyptian proposal calls for an immediate cease-fire, followed by talks on securing Gaza's borders and ending an economic blockade that Israel has imposed since June 2007, when Hamas expelled rival Fatah forces from Gaza to seize sole control of the strip.

U.S. officials have supported the French-Egyptian effort but said the basic issues that led to the conflict need to be resolved upfront. "It has to be a cease-fire that will not allow a return to the status quo," Secretary of State Condoleezza Rice said.

Israel has vowed to continue its 12-day military campaign until it is satisfied that Hamas will be unable to rearm itself by smuggling weaponry through cross-border tunnels from Egypt. Hamas has fired hundreds of rockets, most of them crude and unguided, into southern Israel since a six-month truce between the group and Israel expired Dec. 19.

The Netherlands, Denmark and Turkey said Wednesday they would be willing to contribute to an international force that would patrol the Gaza-Egypt border to prevent smuggling. Israeli officials said they wanted to ensure that any such force would have the authority to stop arms trafficking.

Hamas officials, who have been involved separately in negotiations with Egypt, reacted coolly to the cease-fire plan.

Ahmed Youssef, a Hamas spokesman in Gaza, said the group would not stop firing rockets into southern Israel until the Israeli military withdrew from the Palestinian territory and ended the economic blockade, which has left Gaza's 1.5 million people dependent on smugglers and relief organizations for their basic needs. About 25 rockets landed in southern Israel on Wednesday, wounding two people, the Israeli military said.

The Israeli military observed a three-hour cessation in the fighting Wednesday afternoon to allow relief agencies to deliver about 80 truckloads of emergency supplies. The lull in the violence also gave besieged Gaza residents an opportunity to emerge briefly from their homes and seek food, fuel and medical care.

Gazan medical officials said the pause in fighting led to a drop in casualties compared with other days since Israel launched its ground offensive Saturday. Twenty-nine Palestinians were reported killed Wednesday, bringing the toll to more than 680 since the fighting began, Palestinian health officials said. U.N. officials estimate that about one-third of those killed have been women and children, including three youngsters killed Wednesday when a shell struck a car.

Seven Israeli soldiers and three civilians have died in the conflict. Four of the soldiers were killed by errant shells fired by Israeli forces.
Posted by Dr. J. P. Hubert at 8:46 AM