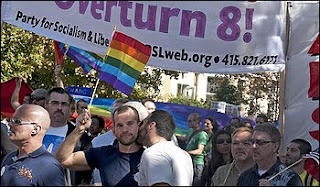 Tens of thousands of gay-rights activists marched Sunday in Washington to show President Obama and Congress that they are impatient with what they consider piecemeal progress and are ready to fight at the federal level for across-the-board equality, including for the right to marry and the right to serve in the military.

Key votes on same-sex marriage are coming up in the District and Maine, and Obama reiterated his campaign promise Saturday to end the "don't ask, don't tell" policy that forces gay and lesbian members of the armed forces to keep their sexual orientation a secret.

But organizers of the National Equality March and its participants said they want to shift the political effort toward seeking equality in all states, rather than accepting just local and state-level victories.

"We're not settling," said Cleve Jones, co-chairman of the march and founder of the Names Project, the AIDS memorial quilt that recognizes Americans who have died from HIV- or AIDS-related causes. "There's no such thing as a fraction of equality. We want equal protection under the law."

The march was coordinated by Equality Across America, a group formed this year. Organizers said they represent those who want immediate fundamental change in the legal status of gays, as opposed to those who think patience is needed as legal obstacles are overcome.

Some in the latter group are political veterans, such as Rep. Barney Frank (D-Mass.), the highest-ranking openly gay political figure in the United States. Last week, Frank said he thought the march was "useless," a remark that was attacked at the rally.

"How many more tears should be shed before some politicians in a backroom can decide it is convenient to join us and fight for our freedom?" asked David Mixner, a longtime activist who spoke at the rally.

Attendees expressed complicated feelings about Obama. Nearly every person interviewed said he or she had voted for him, but many people said they were disappointed by what they see as a lack of action on key gay-rights issues, such as letting gays serve openly in the military.

Marchers carried signs reading "We Won't Wait for Full Equality" and "Mind Your Own Marriage." Spectators watched from the street and the roof of the Newseum, many cheering the participants. As the march ended about 2:30 p.m., people gathered on Capitol Hill for a rally.

Many supporters identified themselves as heterosexual, carrying signs with such slogans as "I'm Not Queer But I'm Here."

"They told me that you didn't care and you wouldn't come," Mixner told the crowd. "The president asked us to help him, and help him we will."

The march occurred at a critical time for the gay-rights movement, with a president who has vowed to fight for equality and Democrats in control of Congress.

Obama pledged Saturday night at a fundraising dinner for the Human Rights Campaign that he would end the military's "don't ask, don't tell" policy, but he provided no specifics on how. Many gay activists said that they are tired of waiting and that he should immediately move to repeal the military's policy and the Defense of Marriage Act.

The retired teacher said she traveled nine hours from Brevard, N.C., with dozens of others to represent children who were too busy working to make the trip. Of her four children, two are gay, she said.

"It's painful as a mother," she said. "It's discouraging. Every parent wants their children to have opportunities. But that's not what our government is about. I've seen nothing from the Obama administration."

"I love President Obama," said Kendra Bopp of Ashtabula, Ohio. "He's not perfect, but his heart's in the right place, and he's trying."

On Tuesday, David A. Catania (I-At Large), an openly gay member of the D.C. Council, introduced a bill that would allow same-sex marriages in the nation's capital. Council members have said they want to pass the measure by Christmas.

Maine is holding a referendum Nov. 3 that could overturn a state law approved in May that allows same-sex marriage. The vote is seen as a bellwether; five other states have legalized same-sex marriage, but none has done it with the affirmation of a popular vote.

Some District residents said they can taste victory.

Matthew Fornataro and William Dooner, a D.C. couple together for 3 1/2 years, said they want to get married as soon as the city will allow.

"Our country was founded on the idea all people are created equal," Fornataro said. "We as a country need to stand up for the ideals the founders based it on."

"D.C. is our nation's capital," said Jamie Stephens, who lives in the District. "If D.C. goes someplace, the rest of the nation is sure to follow. This is just a great steppingstone."

It is truly sad that traditional morality in the United States has deteriorated to the point where homosexuality is now widely considered a "right" i.e. gay "rights", a right to gay "marriage" etc. There can be no right to engage in practices which are contrary to the Natural (moral) Law. Homosexual activity is clearly incompatible with the Natural Law. Any "relationships" which result from such behaviors are illegitimate and destructive of the common good irrespective of what the individuals involved may think.