Israel building Jewish homes with one hand, destroying Arab homes with the other 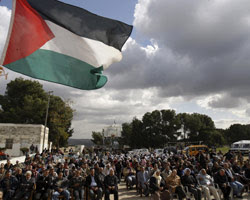 Palestinians attending a rally against the building of Israeli settlements in the West Bank on Wednesday. AP

The World Likud movement held a cornerstone-laying ceremony yesterday for the expansion of the neighborhood of Nof Zion, despite - or possibly because of - American pressure against building in East Jerusalem. The Jewish settlement is in the middle of the Arab village of Jabal Mukkaber. Meanwhile, the Jerusalem municipality razed two Palestinian homes in East Jerusalem yesterday.

The plan is to add to Nof Zion 105 new apartments to the 90 ones that are already there, most of which are already occupied. The neighborhood is considered "prestigious," but the developers ran into trouble a few years ago after they failed to sell the apartments to Jews from overseas. About a year ago the developers changed their marketing strategy to target the local national-religious market - and the apartments began selling quickly. The developers expect the same for the new part of the neighborhood.

The World Likud's announcement of the ceremony said the neighborhood was near Jabal Mukkaber, "bounded by terraces and with olive trees and grapevines."

In fact, however, Nof Zion is in the middle of the village, near Palestinian homes. In September Haaretz reported that the family of the late actor-comedian Shaike Ophir criticized the municipality's decision to name a street in Nof Zion after him.

A group of American Jews interested in buying apartments in Nof Zion attended yesterday's ceremony. New York State Assemblyman Dov Hikind, who is considered a staunch supporter of the settlers, headed the group.

Addressing the ceremony, MK Danny Danon (Likud) said that Jerusalem will never be a part of negotiations with the Palestinians. He called Barack Obama "naive" and said the U.S. president still does not seem to understand who are the good guys and who are the bad guys in the conflict.

Yesterday the Jerusalem municipality razed two Palestinian homes in East Jerusalem, one in Isawiyah and one in Silwan. In both cases, local residents battled security forces.

In Isawiyah villagers tried to block the entrance to the village with cars, while in Silwan local residents threw rocks at police officers after the house was destroyed.
Posted by Dr. J. P. Hubert at 9:31 AM