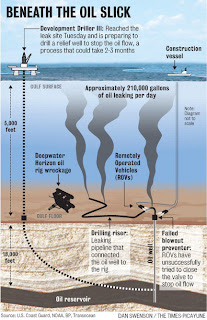 Gov. Bobby Jindal asks feds for help in feeding, training those affected by Gulf of Mexico oil spill
By Ed Anderson,
The Times-Picayune
May 01, 2010, 8:40PM

BATON ROUGE -- Gov. Bobby Jindal called on federal agencies Saturday to make available supplies and funds to help feed and provide jobless benefits to workers thrown out of jobs by by the Gulf of Mexico oil spill.

Jindal asked the federal Departments of Labor and Agriculture departments to let him know by the end of business Monday if they can grant the requests.

In separate letters to the agencies, Jindal pointed out that BP, the oil company that leased the rig that topped and is spewing oil into the Gulf, will ultimately be responsible for making payments to those affected.

He said that was making the requests "in an abundance of caution" in case BP's plans "fall short of meeting the needs of our people."

Jindal said the requests are also being made in preparation for "a worst-case scenario." .

In his letter to federal agriculture officials, Jindal asked them to make available food supplies to the state and disaster relief organizations -- possibly for distribution to shelters, mass-feeding sites and individual households, if needed.

He also asked federal agriculture officials to authorize the use of emergency food stamp benefits to persons who may be out of work or are losing income because of the oil spill.

Jindal said that 10 teams from the state Department of Social Services will be in coastal parishes Monday to interview people who might qualify for the emergency benefits.

Applications can also be obtained HERE..., he said.

Jindal has asked the labor department to approve financing of disaster-related "workforce training and job placement services" for fishers and others who may be out of work as a result of the spill.

He also asked officials for approval of unemployment benefits for workers "displaced as a result of the oil spill."

Federal officials have already approved the pay of up to 6,000 Louisiana National Guard troops for up to 90 days to help in the spill clean-up and related activities. So far, Jindal said, 300 have been assigned to Plaquemines Parish, 300 have been deployed to St. Bernard Parish and another 1,000 are on standby.

Jindal said the Guard will be used to provide security and communications and will help in the clean-up activities
Posted by Dr. J. P. Hubert at 9:27 AM