BP admits more oil is spilling into Gulf than estimated 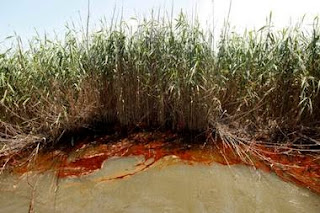 Oil impacted marshes are seen in Loutre, La. on Wednesday, May 19, 2010. Oil from the Deepwater Horizon oil spill is infiltrating the coast of Louisiana. BP has said more oil has leaked into the Gulf of Mexico than originally projected.

BP conceded Thursday that more oil than it estimated is gushing into the Gulf of Mexico as heavy crude washed into Louisiana's wetlands for the first time, feeding worries and uncertainty about the massive monthlong spill.

Mark Proegler, a spokesman for oil giant BP PLC, said a mile-long tube inserted into a leaking pipe over the weekend is capturing 210,000 gallons a day — the total amount the company and the Coast Guard have estimated is gushing into the sea — but some is still escaping. He would not say how much.

Several professors who have watched video of the leak have said they believe the amount spewing out is much higher than official estimates.

Proegler said the 210,000 gallons — 5,000 barrels — has always been just an estimate because there is no way to measure how much is spilling from the seafloor.

"I would encourage people to take a look at the changing amount of oil coming from the ocean floor," said Steve Rinehart, another BP spokesman. "It's pretty clear that now that we're taking 5,000 barrels of oil a day, there's a significant change in the flow reaching the sea."

A live video feed of the leak posted online Thursday at the insistence of U.S. Rep. Edward J. Markey, D-Mass., shows what appears to be a large plume of oil and gas still spewing next to the tube that's carrying some of it to the surface.

The well blew out after an explosion a month ago on the offshore drilling rig Deepwater Horizon that killed 11 people. At least 6 million gallons have spilled so far, making it the worst U.S. environmental disaster in decades. The Exxon Valdez tanker spilled 11 million gallons in Alaska in 1989.
(Editor's emphasis)
Small amounts of light oil have washed up in delicate coastal areas of Louisiana over the past several weeks, but nothing like the brown ooze from the spill that started coating marsh grasses and hanging in the shallow water of a wetland Wednesday.

"This is the heavy oil that everyone's been fearing that is here now," Gov. Bobby Jindal said during a boat tour Wednesday in southeastern Louisiana. The wetlands at the mouth of the Mississippi River are home to rare birds, mammals and a wide variety of marine life.

Much of southeast Louisiana's coastal waters have been closed to fishing and oyster harvesting because of the oil. A vast area stretching east toward Florida in federal waters also has been closed to seafood harvesting.

Officials in Florida sought to reassure tourists that the state's beaches are clean and safe as government scientists said a small portion of the slick had entered the so-called loop current, a stream of fast-moving water that circulates around the Gulf before bending around Florida and up the Atlantic coast.

During a news conference, David Halstead, director of the Florida Division of Emergency Management, showed off a picture of a Coppertone bottle on a beach.

"What's the only oil on the beaches? Suntan oil," he said.

Tracking the unpredictable spill and the complex loop current is a challenge for scientists, said Charlie Henry, a NOAA environmental scientist.

The loop moves based on shifting winds and other environmental factors, so even though oil is leaking continuously it may be in the current one day, and out the next. The slick itself has defied scientists' efforts to track it and predict its path. Instead, it has repeatedly advanced and retreated, an ominous, shape-shifting mass in the Gulf, with vast underwater lobes extending outward.

Florida's state meteorologist said it will be at least another seven days before the oil reaches waters west of the Florida Keys. U.S. officials were also talking to Cuba about how to respond to the spill should it reach the island's northern coast, a U.S. State Department spokesman said.

BP, which was leasing the rig when it exploded, was marshaling equipment and conducting tests Thursday ahead of a new effort to choke off the oil flow. Crews hoped that by Sunday they can start a procedure known as a "top kill," which involves pumping heavy mud into the crippled equipment on top of the well, then permanently sealing it with cement.

The procedure has been used before to halt gushing oil above ground, but like other methods BP is exploring it has never been used 5,000 feet below the sea. That's why scientists and engineers have spent much of the past week preparing and taking a series of measurements to make sure the mission doesn't backfire.

"The philosophy from the beginning is not to take any action which could make the situation worse, and those are the final steps we're doing," said Doug Suttles, BP's chief operating officer.

Anger over the spill has mounted as the efforts to stop the leak have dragged on. Greenpeace activists scaled BP's London headquarters Thursday to hang a flag accusing the oil company of polluting the environment. The group said the action was prompted by the Gulf of Mexico oil spill as well as a controversial project in Canada.

"It takes some cheek to go and use a sunflower logo when your business is dirty oil," Greenpeace activist Ben Stewart said from a balcony above the headquarters' front door in a telephone interview.

BP spokesman Robert Wine called the action "a very calm and genteel protest," and said no employees had been prevented from getting to work.
Posted by Dr. J. P. Hubert at 2:57 PM