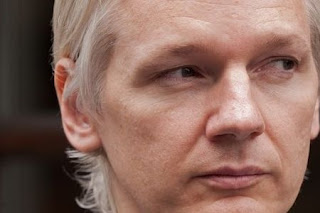 The founder of the whistleblower website WikiLeaks, Julian Assange, who is in London, says he would be arrested if he goes back to the US.

"I have been advised by my lawyers and by senior US national security reporters to not enter into the United States in relation with a previous…leak we did," he said, speaking to Press TV's correspondent in London, Roshan Mohammad Salih on Thursday.

Assange, whose website is known for exposing the US carnage of civilians, recounted the western medias' guardianship of the western governments.

He said the mainstream media maintain a close relationship with the western leadership.

The affinity, he added, would prevent the media outlets and broadcasters from revealing the wrongdoings sanctioned by the authorities.

In April, the website posted an explosive video of a US helicopter attack on Baghdad in 2007 that left 12 people dead, including two employees of the Reuters news agency.

"These pilots start thinking that it really was a videogame. And they got pleasure by getting a high score. And it was also a source or pride to them. So they brag to these ground forces…'Hey, we shot 12 to 15 people. You go there you find 12 to 15 bodies,' " Assange had said about the footage in an earlier interview with Press TV.

Earlier in the month, it published some 91,000 files containing highly confidential information about the US-led war in Afghanistan. The documents included accounts of how the coalition forces had killed or wounded Afghan civilians in unreported attacks.

Not the entire leaked materials have been examined yet, Assange said, thus raising the prospects of further unwelcome expositions. "Well, the entire teams of WikiLeaks, New York Times and Der Spiegel have only gone through in detail about 2,000 of these reports. That is about 2% of the total."

The so-called counter-insurgency operations, which Assange called disaster, have left many thousands of Afghan civilians dead since their 2001 initiation. "This war has continued for the past nine years. We can see from the start of the past six years, that is two-thirds of that time that the violence has been escalating…. This war is going to a bad place."

Investigators with the United States Defense Department launched a hunt for Assange last month as the website was feared to publish classified Pentagon cables.

The director of the Federal Bureau of Investigation (FBI), Robert Mueller said the security apparatus would also assist an underway criminal investigation by the Pentagon into the thousands-strong war leaks.

Assange has, however, said, "We have a lot of supporters, including within the US military … They know that we are after the bad guys and we don't want to expose the good intelligence operations that are happening."
Posted by Dr. J. P. Hubert at 12:55 PM