The Gulf of Mexico is Dying

A Special Report on the BP Gulf Oil Spill

Phoenix Rising from the Gulf
December 1, 2010

It is with deep regret that we publish this report. We do not take this responsibility lightly, as the consequences of the following observations are of such great import and have such far-reaching ramifications for the entire planet. Truly, the fate of the oceans of the world hangs in the balance, as does the future of humankind.

The Gulf of Mexico (GOM) does not exist in isolation and is, in fact, connected to the Seven Seas. Hence, we publish these findings in order that the world community will come together to further contemplate this dire and demanding predicament. We also do so with the hope that an appropriate global response will be formulated, and acted upon, for the sake of future generations. It is the most basic responsibility for every civilization to leave their world in a betterconditionthan that which they inherited from their forbears.

After conducting the Gulf Oil Spill Remediation Conference for over seven months, we can now disseminate the following information with the authority and confidence of those who have thoroughly investigated a crime scene. There are many research articles, investigative reports and penetrating exposes archived at the following website. Particularly those posted from August through November provide a unique body of evidence, many with compelling photo-documentaries, which portray the true state of affairs at the Macondo Prospect in the GOM. 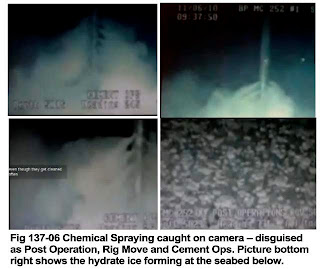 Especially that the BP narrative is nothing but a corporate-created illusion – a web of fabrication spun in collaboration with the US Federal Government and Mainstream Media. Big Oil, as well as the Military-Industrial Complex, have aided and abetted this whole scheme and info blackout because the very future of the Oil & Gas Industry is at stake, as is the future of the US Empire which sprawls around the world and requires vast amounts of hydrocarbon fuel.

Should the truth seep out and into the mass consciousness – that the GOM is slowly but surely filling up with oil and gas – certainly many would rightly question the integrity, and sanity, of the whole venture, as well as the entire industry itself. And then perhaps the process would begin of transitioning the planet away from the hydrocarbon fuel paradigm altogether. 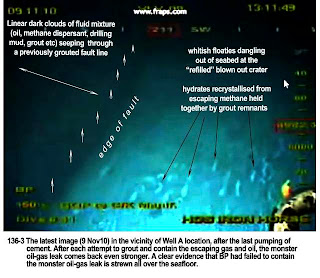 It’s not a pretty picture.

The various pictures, photos and diagrams that fill the many articles at the aforementioned website represent photo-evidence about the true state of affairs on the seafloor surrounding the Macondo Prospect in the Mississippi Canyon, which is located in the Central Planning Area of the northern Gulf of Mexico. The very dynamics of the dramatic changes and continuous evolution of the seafloor have been captured in ways that very few have ever seen. These snapshots have given us a window of understanding into the true state of the underlying geological formations around the various wells drilled in the Macondo Prospect.

Although our many deductions may be difficult for the layperson to apprehend at first, to the trained eye these are but obvious conclusions which are simply the result of cause and effect. In other words there is no dispute around the most serious geological changes which have occurred, and continue to occur, in the region around the Macondo wells. The original predicament (an 87 day gushing well) was extremely serious, as grasped by the entire world, and the existing situation is only going to get progressively worse.

So, just what does this current picture look like. Please click on the link below to view the relevant diagrams and read the commentary MORE...
Posted by Dr. J. P. Hubert at 7:44 AM