This piece is a kind of short summary of Baker's book, Family of Secrets: the Bush Dynasty, America’s Invisible Government, and the Hidden History of the Last Fifty Years which has become quite controversial especially among JKF Assassination Conspiracy advocates. For example, Professor James H. Fetzer who has written extensively on the subject, in an interview with Baker on his Real Deal Radio Program wholeheartedly embraced the work.
Jim De Eugenio however, also a JFK Assassination Conspiracy authority has been critical of Family of Secrets particularly with respect to the material on G H W Bush.

Readers should be aware that this debate exists. Please investigate the evidence for yourselves. 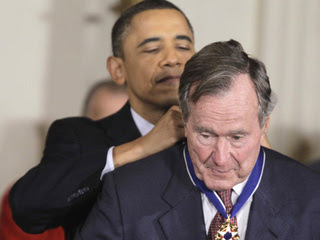 On February 15, President Obama bestowed the Medal of Freedom, the United States’ highest award, to a group of people which includes former president George H.W. Bush. Having spent five years researching the elder Bush and discovering a staggering array of secrets to the man’s life—none of them favorable, I was curious why Obama gave Bush the medal.

Officially, it goes to individuals “who have made especially meritorious contributions to the security or national interests of the United States, to world peace, or to cultural or other significant public or private endeavors.”

Since that covers just about anything, there’s no real need to justify giving the award to “Bush 41.” In fact, the group being honored this year includes the cellist Yo-Yo Ma, baseball great Stan “the Man” Musial, the German Chancellor Angela Merkel, author Maya Angelou and investor Warren Buffett. Over the years, it has gone to every president from JFK (some posthumously)—through Reagan, who got it from his former veep: George H.W. Bush. They skipped Nixon, so obviously there’s nothing mandatory about giving the award to presidents—especially not when a president is ousted before serving out his term. Clinton did not give it to the elder Bush, nor did the younger Bush give it to his father, and so when it came to be Obama’s turn to hand out medals, perhaps the pressure was intense.

Notwithstanding the inevitability of the process, President Obama needed to trot out some explanation or other as to why each recipient was deserving. In remarks at the ceremony, he said that H.W.’s “His life is a testament that public service is a noble calling….his humility and his decency reflects the very best of the American spirit.” And he referred to Mr. Bush’s “extraordinary life of service and of sacrifice.”

His life has certainly been extraordinary. Though whether “decency” is the right term, or whether his activities “reflect the very best of the American spirit,” or whether his has been a “life…of sacrifice” seem to be debatable.

There’s another side to the elder Bush, and it is hard to believe that Obama is completely unaware of any of this. It goes to the heart of Bush’s purported “humility,” and whether it is truly humility—or his need to hide so many secrets. Especially as it relates, remarkably, to the assassination of another president, John F. Kennedy.

Here are some questions that should have been asked of George H.W. Bush before concluding that his life is an open book, or that whatever he did to deserve the Medal of Freedom is based on commonly understood events. These questions are based on revelations from my book, Family of Secrets: the Bush Dynasty, America’s Invisible Government, and the Hidden History of the Last Fifty Years, of which the Obama White House is aware, and copies of which can be found in major American bookstores and libraries, including the Library of Congress. The underlying points are all documented and footnoted—and some of these questions have appeared before in an earlier post on this site and others.

-Former president Bush, we all know that you served for a single year as director of the Central Intelligence Agency. What about the fact trail suggesting that, just like the Russian leader Vladimir Putin, you actually spent your entire adult life prior to becoming vice president working in covert operations—but unlike Putin, have not admitted that? What about documentation showing that, as far back as the early 1950s, your small but hyperactive company, Zapata Offshore, was commercial cover for super-secret ops?

-Some years ago you claimed not to remember where you were on the morning of Nov. 22, 1963? Have you since been able to recall?

-Can you tell us about your decades-long friendship with George de Mohrenschildt, the man who was in and out of Lee Harvey Oswald’s house on almost a daily basis in the year before the Kennedy assassination?

-Did you, as characterized in an FBI memo, work as a CIA officer in tandem with Cuban exiles at the time of the Kennedy assassination?

-Why have you never spoken publicly about the documented call you made to the FBI on Nov 22, 1963, in which you identified yourself fully and claimed to have information on a possible suspect in Kennedy’s death? What was the purpose of that call, in which you mentioned your whereabouts at the time of the call, 1:45pm, as Tyler, Texas, i.e. about 99 miles away but just a short flight on the private plane on which you were traveling? Why did you tell the FBI that you were en route next to Dallas and would stay at the Sheraton there when you had already been at the Sheraton the night before — and right after that call flew to Dallas but only to switch planes and fly back immediately to Houston? Why were you giving the FBI the impression you would be staying in Dallas the night after the assassination instead of letting them know you had stayed there the night before the assassination?

-Why was your own assistant at the home of the man you would finger as a suspect in the shooting, and why did he end up providing the man with an alibi? Was the ultimate purpose of that call was not to cause the alleged suspect any permanent harm, but merely to use the call as an excuse to state in government files that you were in a place other than Dallas?

-Since you claimed not to remember where you were when Kennedy was killed, how is it that after these FBI memos surfaced, your wife Barbara suddenly found and published an old letter placing you and her in Tyler, Texas shortly after the shooting?

-Finally, do you know people who consider the events of November 22, 1963 to, in their minds, “reflect the very best of the American spirit?” You say almost nothing, ever, about the Kennedy assassination, even skipping over it in your own memoir, which details much more trivial events of the same year. Why is that? And why then, in your eulogy for former President Ford, a member of the increasingly-discredited Warren Commission, did you go out of your way to oddly praise him for promoting the increasingly-discredited “single bullet theory?” You said:

“After a deluded gunman assassinated President Kennedy, our nation turned to Gerald Ford and a select handful of others to make sense of that madness. And the conspiracy theorists can say what they will, but the Warren Commission report will always have the final definitive say on this tragic matter. Why? Because Jerry Ford put his name on it and Jerry Ford’s word was always good.”

Why did you, so bizarrely, smile when you uttered those words?

Now, with your Medal of Freedom, given you by a Democratic president who ran as an agent of change, you truly seem to be enjoying the last laugh.
Posted by Dr. J. P. Hubert at 12:01 PM