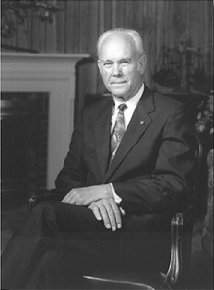 "This is the way the CIA's undercover armies work, as they have operated in countless countries since the end of WWII. They move unobtrusively with a small team, plenty of money, and a boundless supply of equipment as backup.  They make contact with the indigenous group they intend to support, regardless of who runs the government. Then they increase the level of activity until a conflict ensues. Because the CIA is not equipped or sufficiently experienced to handle such an operation when combat intensifies to that level, the military generally is called upon for support. At that time the level of military support has risen to such an extent that this action can no longer be termed either covert or truly deniable.  At that point, as in Vietnam, operational control is transferred to the military in the best way possible, and the hostilities continue until both sides weary of the cost in men, money, material, and noncombatant lives and property. There can be no clear victory in such warfare, as we have learned in Korea and Indochina.
These 'pseudowars' serve simply to keep the conflict (Editor: the constant state of war) going. As we have said above, that is the objective of these undercover tactics.

This concept of the necessity of conflict takes much from the philosopher Hegel (1770-1831). He believed that each nation emerges as a self-contained moral personality. Thus, might certifies right and war is a legitimate expression of the dominant power of the moment. It is more than that. It is a force for the good of the state since it discourages internal dissent and corruption and fosters the spiritual cement of patriotism."

Sadly, Colonel Prouty's prediction that war would become a constant feature of US foreign policy has been realized. He also accurately foresaw the reality that Terrorism would replace Communism as America's enemy number one.

More than anything else, Prouty correctly determined that due to the risk of nuclear conflagration in the wake of Hiroshima, Nagasaki and the Cuban Missile Crisis, future wars would be fought in third-world nations by proxy. He also taught that as the will to wage existent wars wained, new ones would be started to take their place, thus insuring that a state of constant war would be maintained.

One cannot help but think of the protracted and unpopular wars in Afghanistan and Iraq as the new war in Libya gets under way. Once one recognizes that the MIMIC aka "power elite" or "high cabal" benefits from war in multiple ways especially financially, it is not difficult to see why a world at peace has been unachievable.

I wholeheartedly recommend both of Colonel Prouty's books below.

Here is an interesting video that Colonel Prouty made