Extreme conservatives push for tax cuts ... but just for the wealthy.


Extreme liberals are against all tax cuts, believing that we need higher taxes to pay for government programs ... and that taxes somehow won't create any drag on the economy.
Both extremes are wrong.


In fact, tax cuts for the middle class and poor stimulate the economy, but tax cuts for the wealthy hurt the economy.
This is actually a very simple concept, although some politicians and economists unintentionally or intentionally muddy the waters.
As Ed Harrison notes today:
Bruce Bartlett, a Republican political appointee and domestic policy advisor to Ronald Reagan, points out that:
Taxes were cut in 2001, 2002, 2003, 2004 and 2006.
It would have been one thing if the Bush tax cuts had at least bought the country a higher rate of economic growth, even temporarily. They did not. Real G.D.P. growth peaked at just 3.6 percent in 2004 before fading rapidly. Even before the crisis hit, real G.D.P. was growing less than 2 percent a year...
According to a recent C.B.O. report, they (Bush tax cuts) reduced revenue by at least $2.9 trillion below what it otherwise would have been between 2001 and 2011. Slower-than-expected growth reduced revenue by another $3.5 trillion  (6.4 trillion).
Spending was $5.6 trillion higher than the C.B.O. anticipated for a total fiscal turnaround of $12 trillion. That is how a $6 trillion projected surplus turned into a cumulative deficit of $6 trillion.

Bartlett offers this killer chart as a summary of the numbers: 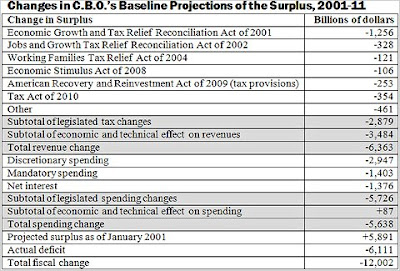 If you recall, it was George W. Bush’s father, GHW Bush, who, when campaigning against Reagan, called supply side economics’ claims that tax cuts pay for themselves Voodoo Economics. And Bush was proved right when deficits spiralled out of control and both Reagan and Bush were forced to raise taxes.
The Bush tax cuts accrued disproportionately to the wealthy. The Tax Policy Center shows that 65 percent of the dollar value of the Bush tax cuts accrued to the top quintile, while 20 percent went to the top 0.1 percent of income earners.

If you want to talk about redistribution, there it is.

Families earning more than $1 million a year saw their federal tax rates drop more sharply than any group in the country as a result of President Bush’s tax cuts, according to a new Congressional study.

The study, by the nonpartisan Congressional Budget Office, also shows that tax rates for middle-income earners edged up in 2004, the most recent year for which data was available, while rates for people at the very top continued to decline.

Based on an exhaustive analysis of tax records and census data, the study reinforced the sense that while Mr. Bush’s tax cuts reduced rates for people at every income level, they offered the biggest benefits by far to people at the very top — especially the top 1 percent of income earners.

The Bush-era tax changes conferred disproportionate benefits to those at the top of the earnings distribution, exacerbating a trend of widening income inequality at a time of already poor wage growth.
The top 1% of earners (making over $620,442) received 38% of the tax cuts. The lower 60% of filers (making less than $67,715) received less than 20% of the total benefit of Bush’s tax policies.

The Bush-era tax cuts were designed to reduce taxes for the wealthy, and the benefits of faster growth were then supposed to trickle down to the middle class. But the economic impact of cutting capital gains rates and lowering the top marginal tax rates never materialized for working families. Inflation-adjusted median weekly earnings fell by 2.3% during the 2002-07 economic expansion, which holds the distinction for being the worst economic expansion since World War II.

This isn't complicated. Rampant inequality largely caused the Great Depression and the current economic crisis. Cutting taxes on the middle and lower classes reduces inequality and stimulates the consumer economy. But cutting taxes for the wealthy reduces aggregate consumer demand.

First, the rich spend a smaller proportion of their wealth than the less-affluent, and so when more and more wealth becomes concentrated in the hands of the wealth, there is less overall spending and less overall manufacturing to meet consumer needs.

Second, in both the Roaring 20s and 2000-2007 period, the middle class incurred a lot of debt to pay for the things they wanted, as their real wages were stagnating and they were getting a smaller and smaller piece of the pie. In other words, they had less and less wealth, and so they borrowed more and more to make up the difference. As Reich notes:

Between 1913 and 1928, the ratio of private credit to the total national economy nearly doubled. Total mortgage debt was almost three times higher in 1929 than in 1920. Eventually, in 1929, as in 2008, there were “no more poker chips to be loaned on credit,” in [former Fed chairman Mariner] Eccles' words. And “when their credit ran out, the game stopped.”

And third, since the wealthy accumulated more, they wanted to invest more, so a lot of money poured into speculative investments, leading to huge bubbles, which eventually burst. Reich points out:

In the 1920s, richer Americans created stock and real estate bubbles that foreshadowed those of the late 1990s and 2000s. The Dow Jones Stock Index ballooned from 63.9 in mid-1921 to a peak of 381.2 eight years later, before it plunged. There was also frantic speculation in land. The Florida real estate boom lured thousands of investors into the Everglades, from where many never returned, at least financially.

Tax cuts for the little guy gives them more "poker chips" to play with, boosting consumer spending and stimulating the economy.

On the other hand (despite oft-repeated mythology), tax cuts for the wealthiest tend to help the big businesses ... which don't create many jobs.

In fact, economics professor Steve Keen ran an economic computer model in 2009, and the model demonstrated that:

Giving the stimulus to the debtors is a more potent way of reducing the impact of a credit crunch [than giving money to the big banks and other creditors].

And as discussed above, Reich notes that tax cuts for the wealthy just lead to speculative bubbles ... which hurt, rather than help the economy.

Indeed, Keen has demonstrated that "a sustainable level of bank profits appears to be about 1% of GDP" ... higher bank profits lead to a ponzi economy and a depression. And too much concentration of wealth increases financial speculation, and therefore makes the financial sector (and the big banks) grow too big and too profitable.

No wonder Ronald Reagan's budget director David Stockman called the Bush tax cuts the "worst fiscal mistake in history", and said that extending them will not boost the economy.
Posted by Dr. J. P. Hubert at 11:25 AM