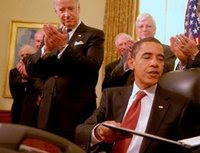 Washington Times, January 24, 2009 - President Obama on Friday repealed the Mexico City policy, a controversial Reagan-era measure that withheld funding to foreign aid organizations that perform abortions or refer women to abortion providers, which had been rescinded by President Clinton and re-instituted by President Bush.

Mr. Obama signed the executive order one day after tens of thousands of Americans protested in front of the White House against Roe v. Wade, on the 36th anniversary of the Supreme Court decision legalizing abortion. The decision shows that Mr. Obama will deliver on his campaign promises to be one of the most pro-choice presidents in modern history...MORE...

While President Obama exercised good moral judgment in reversing the Bush administration policies on enhanced interrogation (torture) of terrorism suspects, his decision to again allow federal funding to foreign aid organizations that perform abortion or refer women to abortion providers is extremely disappointing although not unexpected. It is of course always morally illicit to either passively or actively participate in the intentional procuring of abortion--which the Mexico City Policy clearly allows.

I intend to critique all of the new President's major policy initiatives from a traditional (Aristotelian/Thomistic) moral perspective in order to provide some needed moral clarity that is not sympathetic to or influenced by political party affiliation.