Turley: Most people abroad will view Bush as a war criminal 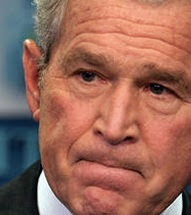 Barack Obama has now been inaugurated as president, and the fear expressed by MSNBC's Rachel Maddow on Monday night that George Bush might issue last-minute pardons of administration officials involved in torture, possibly including himself, has not come to pass.

However, the torture issue itself is not going to go away so easily. As Maddow also noted, "The calls for a reckoning are growing by the day -- and not just from progressives outside the government."

"Do you think that Obama and his team realized how hot an issue this would become and would stay?" Maddow asked Constitutional law professor Jonathan Turley.

"I don't think so," Turley replied. "I don't think the people in that building thought it," he added, pointing to the Capitol. "I mean, that building is where principles go to die. And they haven't, because there's been this groundswell of people saying, 'Look, you might be able to get away with an electronic surveillance program and say that's just a crime we're not going to allow to be prosecuted, but these are war crimes., these are a special category.'"

"I think that the new Barack Obama, the President Obama, is going to find it very hard to go round the world and to say that we're now again the nation of rules of law," Turley suggested, "if the first act he commits as president is to talk away from a confirmed war crime."

"Are we literally looking at a possibility," Maddow asked, "where administration officials from this [previous] administration cannot travel abroad to the other 145 countries that have signed the torture treaty because they might get arrested?"

"Most certainly," Turley replied. "The status of George Bush is not that different from Augusto Pinochet. They've both been accused of running a torture program. And outside this country, there's not this ambiguity about what to do with a war crime. ... Most people abroad are going to view you not as former President George Bush, they're going to view you as a current war criminal."

"And they're going to view us as an outlaw regime for not arresting him on our own soil," Maddow remarked.