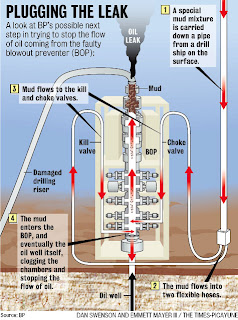 Later this week, BP will perform a "top kill" on the oil well. The process requires injecting 40 barrels a minute of "kill mud" into the broken well and then sealing it with cement. The material will be pumped at high pressure down the choke and kill lines of the blowout preventer, which failed to seal the well after the Deepwater Horizon rig exploded on April 20. Choke and kill lines are used to control the amount and pressure of drilling mud in the wellbore, so that surges of oil and natural gas can be kept under control.

BP had initially planned to precede the top kill with a "junk shot," pumping debris such as golf balls and shredded tires into the blowout preventer to clog the leak, before adding the mud. But BP decided not to do the junk shot under concerns that it might cause more damage. BP spokesman Mark Proegler said the junk shot carried certain risks, specifically that the debris could shoot through the well causing more oil to leak.
Posted by Dr. J. P. Hubert at 11:39 AM