A U.S. citizen who lived in Turkey is among the nine people killed when Israeli commandos stormed a Turkish aid ship heading for the Gaza Strip, officials said today. The victim was identified as Furkan Dogan, 19, a Turkish-American. A forensic report said he was shot at close range, with four bullets in his head and one in his chest, according to the Anatolian news agency. 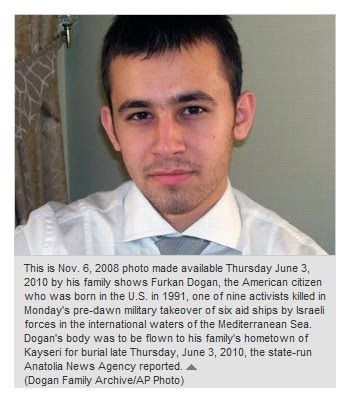 Dogan was a high school student studying social sciences in the town of Kayseri in central Turkey. He was born in the United States and moved to Turkey at the age of 2. He will be buried in his hometown tomorrow.

Dogan's body was returned to Turkey today along with eight others, all Turkish nationals, who were on board the Mavi Marmara.

The ship was sponsored by a Turkish charity, the Foundation for Human Rights and Freedoms and Humanitarian Relief (IHH) and was carrying aid to Gaza in defiance of the Israeli blockade. The charity released the names of all nine dead. All are male and the ages range from 32 to 61.

The Mavi Marmara formed part of a flotilla that was organized by the Free Gaza movement and intended to break the three-year Israeli blockade on the embattled Palestinian enclave. (Editor's bold emphasis)

Israeli commandos rappelled onto the decks of the six ships Monday, but on the Mavi Marmara the passengers battled the soldiers with metal rods, wrested weapons from soldiers and, according to the Israeli military, fired on them. Nine people died and more than 30 were wounded, including several Israeli troops.

The activists on board the ship told a very different version of events from the one released by the Israeli military.

A Canadian on board, Farooq Burney, described watching an elderly man bleed to death. The head of a Turkish charity that organized the aid flotilla said an Indonesian doctor was shot in the stomach and a photographer was shot in the forehead. MORE...
Posted by Dr. J. P. Hubert at 1:43 PM