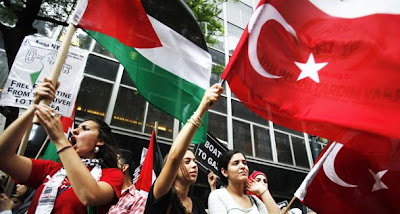 Protesters hold Palestinian and Turkish flags during a rally to denouncing Israel’s attack on an aid ship bound for Gaza. – AP Photo

For Israel, the tectonic plates shifted on Monday when its ham-fisted attempt to prevent the Freedom Flotilla from reaching Gaza blew up in its face. The fallout from its lethal commando raid on the Mavi Marmara is still spreading around the world as it scrambles to escape the consequences of a public relations disaster of the first magnitude. Judging from the enormous negative coverage the incident is receiving here in the UK and around the world, being an Israeli diplomat posted in a foreign capital would be a singularly thankless job these days.

However, reading the UN Security Council resolution that emerged after hours of tough negotiations makes it clear that Israel still has powerful friends in Washington. The watered down text reflects American anxiety to shield its ally from the much harsher language of the original draft presented by Turkey. Nevertheless, the fact that the US did not use its veto indicates a more calibrated approach towards Israel than we have witnessed in the recent past.

Liberal public opinion – albeit a small minority in Israel – recognises the insanity of the action as well as of the blockade of Gaza. Ha’aretz today contained a number of articles condemning the raid on a ship carrying unarmed peace activists, and deploring the myopic policy that caused it. The Jerusalem Post, however, lived up to its image of the mouthpiece of jingoistic Zionists by justifying the siege of Gaza, and Israel’s right to board the ship on the high seas. In an article titled Sinking Turkey-Israeli Relations, Anat Ladipat-Firilla argues that Turkey is positioning itself as a regional power, and as a leader of Sunni Muslim countries. According to the writer, this shift in Turkish foreign policy brings it into conformity with the ideology of the ruling AK Party. He also suggests that by de-legitimising Israel, Turkey would enhance its standing in the Muslim world.

It is certainly true that ever since the Israeli assault on Gaza early last year that resulted in 1,400 Palestinian deaths, Turkey has been downgrading its close ties with Israel. The deterioration in relations has been marked by a cancellation of joint military exercises; now, an energy deal is under threat. However, a $180 million order to import a number of Israeli Heron drones is still in place. For Israel, this deterioration in ties would be a disaster as close military links with Turkey have been crucial to its strategic interests. Turkey has been an active mediator between Israel and Syria, and provides an important market for Israeli arms. Israeli air force pilots have trained regularly in Turkish airspace, and the armed forces of the two countries have long conducted exercises together.

The reason for current Turkish fury is that the Israelis ignored the fact that the Mavi Marmara is a Turkish vessel, carrying a large number of Turks. It had been inspected at a Turkish port to make sure there were only relief goods on board, and the sponsor of the relief expedition was a well-known Turkish organisation, the IHH. Thus, the flotilla had sailed with Ankara’s blessings and encouragement. For the Israelis to behave in such a barbaric way towards a friendly country’s citizens was an own goal the Nethanyahu government must be secretly ruing.

Although the perception around the world is that Israel gets away with its oppression of Palestinians because of its highly effective lobby in the United States, the reality is somewhat more nuanced. It is true that after President Obama tried to pressure Tel Aviv to halt its colonisation policies in the West Bank and Jerusalem, a number of congressmen – including those from his own party – approached him to persuade him to back off, citing the congressional elections due in November. It seems these tactics have worked, at least for now. But significantly, a top American general said in testimony before a congressional committee that unquestioning support for Israel was putting the lives of US soldiers at risk. So although Washington is still strongly committed to its ally, there are important voices urging a more critical approach. Once the November elections are behind him, Obama might live up to his promise of applying pressure on Nethanyahu. According to reports, he is angry and frustrated over the appalling conditions the Gazans are living in due to the Israeli siege.

Ultimately, there are no permanent friends or enemies in international relations, only permanent interests. Thus far, Israel has thrived by playing on Western guilt and sympathy over the Holocaust, as well as the fact that it is the only democracy in the Middle East. Of course, the ingenuity and hard work of its people have played a large part in making it the success story it undoubtedly is. Nevertheless, the world is growing increasingly tired of the endless crises that erupt periodically as Israel maintains its tight grip over occupied land despite the obdurate resistance posed by the Palestinians.

After this latest example of self-defeating brutality, even Israel’s friends in Europe have condemned the violence, and have called for an independent enquiry. But after a time, things will quieten down again until the next explosion. Meanwhile, it is Turkey whose moral outrage will propel this anti-Israel narrative. Prime Minister Tayyip Erdogan has denounced the commando raid as state terrorism, and the Turkish foreign minister said at the UN that the Israeli action ‘blurred the line between the state and terrorism’. (Editor's bold emphasis throughout)

As I write this, two more relief ships have set sail for Gaza. According to the Jerusalem Post, they will be met with the same kind of reception that greeted the Freedom Flotilla on Monday. Unfortunately, the Israeli leadership have not learned any lessons from their own history: in July 1947, a ship called the Exodus set sail from France with Jewish concentration camp survivors intent on breaking the British blockade of Palestine. The Exodus was intercepted in international waters and its passengers taken to Germany to be interned until they could be screened for Zionist terrorists. Many of the passengers resisted being carried ashore, and fought British soldiers with sticks and whatever came to hand. While Lt-Colonel Gregson praised the fortitude of his men in resisting the temptation to use guns despite some of them getting badly beaten, he went to write:

“It should be borne in mind that the guiding factor in the actions of the Jews is to gain the sympathy of the world press.”

Israel has painted itself into a corner, but lacks the capacity to say ‘sorry’ and attempt to minimise the damage it has caused itself so unnecessarily.
Posted by Dr. J. P. Hubert at 1:20 PM