Oil Spill Capped for a Second Day, Offering Some Hope

NEW ORLEANS — The hemorrhaging well that has spilled millions of gallons of oil into the Gulf of Mexico remained capped for a second day Friday, providing some hope of a long-term solution to the environmental disaster. 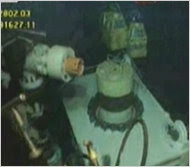 Live video from the seabed Friday morning showed that all was quiet around the top of the well, suggesting the test assessing the integrity of the well was continuing. Earlier in the week, Kent Wells, a senior vice president for BP, had said that the longer the test continued the better, because it would indicate that the pressure inside the well was holding.

The oil stopped flowing around 2:25 p.m. Thursday when the last of several valves was closed on a cap at the top of the well, Mr. Wells said.

The announcement that the oil had stopped flowing into the Gulf came after a series of failed attempts to cap or contain the runaway well that tested the nation’s patience. Mr. Wells emphasized that pressure tests were being conducted to determine the status of the well, which is now sealed like a soda bottle. BP and the government could decide to allow the oil to flow again and try to collect all of it; they could allow the oil to flow and, if tests show the well can withstand the pressure from the cap, close the well during hurricanes; or they could leave the well closed permanently.

The last option seems unlikely, but whatever the decision, the cap is an interim measure until a relief well can plug the leak for good.

“I am very pleased that there’s no oil going into the Gulf of Mexico,” Mr. Wells said, “but we just started the test and I don’t want to create a false sense of excitement.”

That was not much of a risk along the Gulf Coast, where countless livelihoods have been put in jeopardy and fishermen frequently and gloomily remark that Prince William Sound has never been the same since the Exxon Valdez disaster.

“It’s like putting a Band-Aid on a dead man in my opinion,” said Jeff Ussury, 48, who considers his days as a crabber over for good. He doubted the news of the capping was even true.

“I started out kind of believing in them,” he said, “but I don’t believe in them at all anymore.”

Whether it was just the eye of the hurricane or the morning after the storm, the moment was a time to take stock of just how much damage had already been done since the deadly explosion on the Deepwater Horizon oil rig on the night of April 20.

For weeks, the BP spill camera — which along with terms like “top kill,” “containment dome” and “junk shot” made up a growing list of phrases that many people wish they had never learned — had shown a horrible chocolate plume of oil pouring upward from the broken blowout preventer, a symbol of government and corporate impotence. The plume has been a constant presence in the corner of TV screens, mocking reassurances from officials on the news programs who describe the latest attempt to stop the gushing.

But the view on Thursday afternoon was eerily tranquil, just the slate blue of the deep interspersed with small white particles floating across the screen. Though the exact amount of the oil that has poured out of the well may never be known, it was suddenly and for the first time a fixed amount. The disaster was, for a little while at least, finite.

At the White House, President Obama called the development a “positive sign,” though he cautioned that the operation was still in the testing phase.

In statements, Louisiana officials, including Gov. Bobby Jindal, said they were “cautiously optimistic.”

Officials at all levels played down expectations. Thad W. Allen, the retired Coast Guard admiral who is coordinating the spill response, told reporters on Thursday that the cap was primarily meant to be used to shut the well during extreme weather.

“The intention of the capping stack was never to close in the well per se,” he said. “It creates the opportunity if we have the right pressure readings to shut in the well. It allows us to abandon the site if there is a hurricane.”

He said that after the test, the cap would be used to capture oil through surface ships — two that are on the site now and two more that will be in operation in a week or two. With all four collection ships in place, BP could capture all of the oil, estimated at 35,000 to 60,000 barrels per day.

Mr. Wells cautioned that the test could take 48 hours or more, as scientists study pressure readings from the cap. If pressure rises and holds, that would be a sign that the casing — the 13,000-foot string of pipe that lines the well bore — is undamaged.

But if the pressure stays low or falls, that would suggest the well is damaged. In that case, Mr. Wells said, the test probably would be stopped well ahead of schedule, valves would be reopened and collection systems that had been shut down for the test would start again.

“Depending on what the test shows us, we may need to open this well back up,” he said.

The test had been delayed by about two days, first when the government ordered a last-minute review of the procedure out of concern that, by allowing the buildup of pressure, the test itself might harm the well. A particular fear, experts said, was that it might cause a shallow blowout — damaging the well lining close to the seabed, which could allow oil and gas to escape into the gulf outside the well, making the spill worse.

By Wednesday afternoon, those concerns had been allayed and preparations were made to begin the test. But late that night, a hydraulic leak was discovered in part of the choke valve equipment, and the test was scrubbed.

Thursday afternoon the test began again, first with the shutting down of pipes that funneled oil and gas to two surface ships.

In even the most optimistic case, the BP oil spill is far, far from over.

There are still millions of barrels of oil out in the gulf and months of work missing for fishermen and shrimpers; inestimable harm is still being inflicted on wildlife throughout the food chain; and anger still seethes along the Gulf coast.

“What’s to celebrate?” asked Kindra Arnesen, the wife of a shrimper from Plaquemines Parish, La., who has become a recognizable voice of outrage over the past two and a half months.

“My way of life’s over, they’ve destroyed everything I know and love,” she said, before going on to explain, in detail, why she believes the pressure tests are likely to fail.
Posted by Dr. J. P. Hubert at 5:48 AM