The first day of an "integrity test" on the blown-out well that for months had been shooting oil into the Gulf of Mexico ended with uncertainty, the federal government's point person for spill response said Friday. 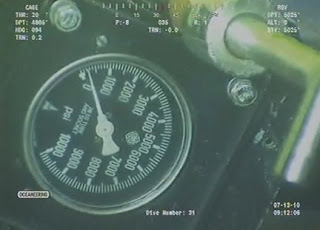 BP PLC, via The Associated PressPressure lower than 6,000 pounds per square inch would signal that the well is damaged and that oil is escaping through fissures somewhere. This pressure gauge was photographed July 13.

Retired Coast Guard Admiral and National Incident Commander Thad Allen said the well appears to be in good condition, but that scientists have not yet been able to rule out the possibility of ruptures in the well below the sea floor.

Efforts were under way Friday to increase monitoring at the site to determine whether there are leaks.

"This is generally good news," Allen said. "I think we're at a point where there's enough uncertainty regarding what the pressure means we need to do due diligence going forward to be in a situation where we don't do any harm."

The integrity test involves measuring the pressure inside the Macondo well, which had until Thursday been gushing oil since the Deepwater Horizon rig exploded and sank in the Gulf of Mexico April 20, killing 11 people. BP operated the rig, which it leased from Transocean. The well was closed in Thursday afternoon so that the test could commence.

The results are important because well integrity, or a high pressure reading, would mean that the well can remain shut and oil flow into the Gulf continually halted until the Macondo well is pumped with cement and sealed next month. Low pressure, however, would mean that the well would need to be reopened, allowing oil to spew unfettered into the Gulf until a system of oil collection vessels began pumping again.

Pressure inside the blown-out Macondo well was at 6,720 pounds per square inch on Friday, a grey area that provided two possible answers about the well's condition, Allen said. 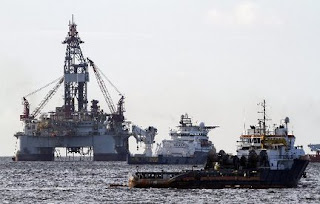 Patrick Semansky, The Associated Press These vessels assisting in the capping of the Deepwater Horizon wellhead were photographed Friday in the Gulf of Mexico.


It's possible that there are holes in the well that are leaking oil, Allen said. But it is also possible that the reservoir has been "depleted" in the near three months since the spill began and is no longer capable of producing high rates of pressure.

"There are plausible supporting arguments for both of those," Allen said. "There's a very good chance that depletion could have done it. We're looking for indications that there could be leakage."

So far, there has been no indication of leaking oil, Allen said.

Two ROVs are monitoring the sea floor around the well looking for burps of methane gas or other anomalies. Four of the undersea robots are conducting sonar scanning. None of the vehicles has detected oil outside the well.

Other tests, one that measures the temperature near the top of the well and another that uses acoustic sensors, also did not find oil.

"If we didn't have integrity and we were leaking oil and gas into some lower formation, this should pick that up," Wells said. "We're continuing with it, and at this point there is no evidence that the well does not have integrity, and that is a good thing."

More testing equipment, including a National Oceanic and Atmospheric Administration vessel, were being brought to the site Friday evening to conduct more tests.

Wells said the results so far appear to match with models BP engineers and government scientists have created for what an intact well with a depleted reservoir would produce.

"We've done modeling under numerous different scenarios. The pressure buildup we're seeing is consistent with the modeling we did around reservoir depletion and full integrity," Wells said. "The longer we monitor these trends the longer we'll convince ourselves that that is the case."

Wells said pressure within the Macondo well would not continue rising if it were breached. Instead it would flat-line, and possibly fall.

A Texas geologist who has been following the gusher said he believed well depletion is the likely cause of the lower-than-hoped-for pressure reading, not a leaking well.

"I don't think it's a cause for immediate concern, because it could reflect a natural loss of oil in the reservoir," said Don Van Nieuwenhuise, director of the Professional Geoscience Programs at the University of Houston. "It's amazing that it has held its strength for as long as it has."

BP engineers and a team of government and academic scientists are monitoring the pressure readings and meeting every six hours to determine how to proceed, Allen said. If oil is detected outside the well, Allen said crews would immediately try to relieve the pressure inside the well by releasing oil into the sea again. Oil would flow unfettered until two oil collection vessels, the Helix Producer and the Q4000, could be restarted. That process could take "several hours," Allen said. Together, the vessels have the capacity to collect 35,000 barrels of oil. A BP plan, approved by the Coast Guard last month, calls for a total of four vessels with the capacity to collect up to 80,000 barrels of oil to be at work by the end of this month.

Even if it is determined that the well can remain shut in, that would only be a short-term solution for the gusher. The long-term solution for stopping the leak still is a relief well that would connect with the runaway well at about 18,000 feet below the water's surface and pump it with mud and cement.

The relief well has been drilled to about 17,840 feet. Wells said crews would drill for another 30 feet before intercepting the well at the end of July. From that point, it could take from days to a few weeks to kill the well.

A backup relief well has been drilled to 15,874 feet, but drilling on that well has been suspended so as not to interfere with the primary well.
Posted by Dr. J. P. Hubert at 7:10 AM