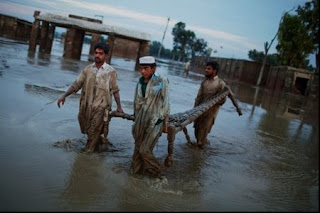 Residents carry furniture from their flood affected homes on August 2, 2010 in northwestern Pakistan.

The Red Cross says 2.5 million people have been affected by massive floods in Pakistan as rescuers struggle to reach thousands of Stranded survivors in the region.

"In the worst-affected areas, entire villages were washed away without warning by walls of flood water," the International Committee of the Red Cross said in a statement.

Reports say rescue operations are still underway to save 27,000 of trapped people in parts of Swat Valley, Khyber and Peshawar.

Some districts have been completely cut off in the worst flooding in the region in over 80 years. The affected areas are reported to be out of electricity, gas and telephone services.

The rushing water has also washed away dozens of government buildings, schools and hospitals.

Concerns are growing over disease outbreaks in flood-stricken areas of the country.

Pakistani health officials warn that lack of drinking water is spreading cholera in north-western areas, estimating that about 100,000 people, mostly children, have been hit by water-borne diseases.

The information minister for northwest province of Khyber Pakhtunkhwa told a news conference in Peshawar on Monday that floods and monsoon rains have claimed 1,500 lives.

"There are 774 deaths registered with us, but the total number killed in the flood is 1,200 to 1,500," AFP quoted Mian Iftikhar Hussain as saying.

This is while Pakistan's National Meteorological Department has predicted ten percent more rain this year than normal.

Anger is mounting over the pace of relief efforts as many people in the areas hardest hit by the floods still have yet to receive any form of flood relief assistance. Refugees are sheltered in crowded government schools and other official buildings.
Posted by Dr. J. P. Hubert at 6:14 AM