Iran, Nuclear Weapons and the Rush to War

By The Associated Press

August 01, 2010 "Haaretz" -- Chairman of the U.S. Joint Chiefs of Staff Adm. Mike Mullen said Sunday that the U.S. military has a plan to attack Iran if necessary, but clarified that he considered such a strike to be a bad idea.

Mullen, the highest-ranking U.S. military officer, has often warned that a military strike on Iran over its contentious nuclear program would have serious and unpredictable ripple effects around the Middle East. At the same time, he has called the risk of Iran developing a nuclear weapon unacceptable.

Mullen would not say which risk he thinks is worse, but told NBC television's Meet The Press that a military strike remains an option if need be. Should come to that, Mullen added, the military has a plan at hand. He did not elaborate.

Both the U.S. and Israel have declared that the option of attacking the Islamic Republic must remain on the table.

Iran's envoy to the United Nations earlier Sunday warned that the Islamic Republic would set Tel Aviv ablaze if Israel dares attack it.

"If the Zionist regime commits the slightest aggression against Iranian soil, we will set the entire war front and Tel Aviv on fire," Mohammad Khazai said, Kashmar, the Farhang-e Ashti daily reported.

“Iran is not guaranteeing a peaceful production of nuclear power [so] the members of the G-8 are worried and believe absolutely that Israel will probably react preemptively,” Berlusconi told reporters following talks with other Group of Eight leaders.

Iranian military officials said last week that the United States and Israel would not dare attempt a military strike of Iran's nuclear sites, adding that they were confident that Tehran would easily repel such an attempt.

The United States, the United Nations and the European Union have each imposed new restrictions on Iran over its nuclear enrichment activities.
____________

US Has Plan to Attack Iran, Mullen Admits: Insists Plan Is Only Meant to Be Used 'If Necessary'

Just weeks ahead of a planned P5+1 talk with Iran, Joint Chiefs of Staff Chairman Admiral Michael Mullen announced on Meet the Press that the military has drawn up plans to attack Iran, though he insisted they would only do so ‘if necessary‘

Mullen said the prospect of attacking Iran is “well understood” and that it remains “an important option” for President Obama. Iranian officials warned they would retaliate if attacked by the US.

The US has been threatening to attack Iran for several years, but perhaps the most memorable was a comment by Secretary of State Hillary Clinton last year, in which she threatened to attack Iran “the way that we did Iraq.”

The US invaded Iraq in 2003 on the basis of false claims regarding its nuclear program. The US threats against Iran are likewise based on allegations centering around their civilian nuclear program.

How absurd. There is absolutely no existential threat to the security of the United States posed by Iran--irrespective of whether it is in the process of producing a nuclear weapon--which to date has not been proven.

Recall that the last US NIE on Iran held that Iran abandoned any attempt at building a nuclear weapon years ago. The fact that a subsequent NIE has not been produced suggests that nothing has changed and that the saber rattling for war with Iran is all propaganda on the part of the war monger's.

What is truly sad is that a constant state of war has become the default position of those in power despite the fact that polls show a majority of American's oppose it.

According to Thierry Meyssan, the debate around the possible existence of an Iranian military nuclear programme is nothing but a smokescreen. The great powers suspended all transfer of technology with the overthrow of the Shah and the Islamic Revolution repudiated the principle of the atomic bomb. The feigned suspicions of western countries are merely a ploy to isolate a state which calls into question the military and energy dominance of the nuclear powers and their veto rights at the Security Council. 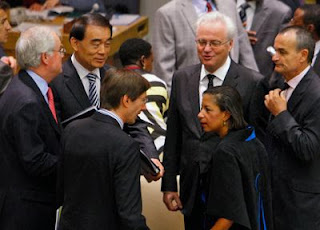 The White House issued a press kit explaining the thrust of Security Council resolution 1929 [1]. Its content – as well as the widespread communication campaign behind it - were relayed by the mainstream media without, as usual, the slighest critical approach.

According to the Western media – parroting the White House – the resolution was adopted by a “large majority” and constitutes “a reponse to Iran’s constant refusal to comply with its internacional obligations related to its nuclear programme”. Let’s take a closer look.

Of the 15 Security Council members, 12 voted in favour of adopting the sanctions (including the five permanent members), 1 abstained and two voted against [2]. This “large majority” actually shrouds a new political divide: for the first time in the history of the Council, a bloc of emerging nations (Brazil and Turkey, supported by the non-aligned countries in unison) took a stand against the permanent members (China, France, Russia, UK and USA) and their vassals. Thus, in reality, this “unanimity minus two votes” reflects the chasm between the Directory of the Big Five and what one must again refer to as the Third World by analogy to the Thid Estate [3], or those whose voice doesn’t count.

Brazil played a key role in the framing of the Tlatelolco Treaty, establishing Latin America as a “nuclear-free zone”. Turkey is actively pursuing the same objective for the Middle East. The sincerity of these two countries’ opposition to the proliferation of nuclear weapons is beyond doubt. As is the fact that Turkey, which shares a common border with Iran, should be particularly concerned with preventing Tehran from acquiring the atomic bomb.

Why, then, did they vote against Resolution 1929? As we shall see, the problems conjured up by the big powers are but a smokescreen intended to stymie the deeper debate allowing Iran and the non-aligned bloc to denounce their privileges. 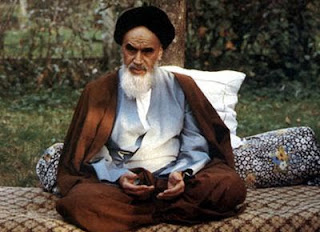 Ayatollah Rouhollah Khomeini (1902-1989) declared that weapons of mass destruction are incompatible with Islam.

The myth of the Iranian bomb

During the reign of Shah Reza Pahlevi, the United States and France implemented a wide programme to equip Tehran with the atomic bomb. In view of its history, it was generally accepted that Iran was not an expansionist State and that the great powers could safely provide it with such technology. MORE...
Posted by Dr. J. P. Hubert at 12:30 PM