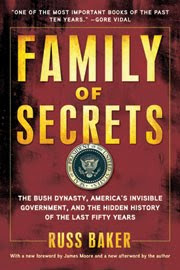 Russ Baker is the author of the recent book Family of Secrets: The Bush Dynasty, the Powerful Forces that put it in the White House, and what their Influence Means for America (New York: Bloomsburry Press, 2009). It is an extremely interesting work.

Professor Jim Fetzer conducted two interviews with Mr. Baker on his Real Deal Podcasts which I wholeheartedly recommend. They can be accessed HERE... Scroll down the home page to the entries for November 22 and November 24 respectively.
Please visit Russ Baker's Family of Secrets and Who, What, Why sites for additional important information.


Family of Secrets Revelations:
Learn why the conventional understanding of Watergate gets the story wrong. Discover how Nixon was implicated in a sprawling plot to which he was not a party, and how an aggressive effort was mounted to use the ‘facts’ of the case to force him from office. Read new revelations about the precise involvement of Poppy Bush, Bob Woodward and White House counsel John Dean in this still-mysterious American epic.

•Why George H.W. Bush can’t remember where he was on November 22, 1963
•Why oilman George H.W. Bush shows up in early CIA documents
•The real story behind George W. Bush’s missing military service
•The inside scoop on the Bushes and Saudi influence in America
•The strange saga of Harvard University and its endowment
•The untold real story behind George W. Bush’s religious awakening
•Never before told anecdotes from George W. Bush’s wild past
•How the CIA monitors the White House and its occupants
•Why Barack Obama and his supporters should read this book

AND MUCH MUCH MORE

Famed JFK Assassination author James DeEugenio has written a negative review of Russ Baker's book particularly the claim that George H. W. Bush was involved in the Watergate Episode. De Eugenio's book review should be read and his arguments seriously considered.
Posted by Dr. J. P. Hubert at 11:55 AM