Armada of U.S. and Israeli Warships Head for Iran

More than twelve U.S. and Israeli warships, including an aircraft carrier, passed through the Suez Canal on Friday and are headed for the Red Sea. “According to eyewitnesses, the U.S. battleships were the largest to have crossed the Canal in many years,” reported the London-based newspaper al-Quds al-Arabi on Saturday. 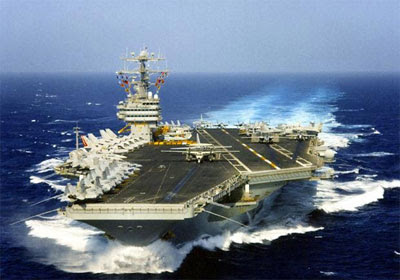 The Israeli newspaper Haaretz reported Egyptian opposition HERE...members criticized the government for cooperating with the U.S. and Israeli forces and allowing the passage of the ships through Egyptian territorial waters. The Red Sea is the most direct route to the Persian Gulf from the Mediterranean.

Retired Egyptian General Amin Radi, chairman of the national security affairs committee, told the paper that “the decision to declare war on Iran is not easy, and Israel, due to its wild nature, may start a war just to remain the sole nuclear power in the region,” according to Yedioth Internet HERE..., an Israeli news site.

The passage of a warship armada through the Suez Canal and headed for the Persian Gulf and Iran is apparently not deemed important enough to be reported by the corporate media in the United States.

The United States and Israel, the sole nuclear-armed power in the Middle East, have not ruled out a military strike to destroy Iran’s nuclear program.

A number of Israeli politicians and scholars have admitted Israel has used its nuclear weapons for “compellent purposes,” in short forcing others to accept Israeli political demands HERE....

Israel’s threats to use nuclear weapons have increased significantly since it was discovered in 2002 that Iran was building uranium enrichment facilities. Israel’s former Prime Minister Ariel Sharon “called on the international community to target Iran as soon as the imminent conflict with Iraq is complete,” the Sunday Times HERE...reported on November 5, 2002. The United States invaded Iraq on March 20, 2003.

Earlier this month Israel leaked to the press that they had permission from Saudi Arabia to use their air space to attack Iran. “In the week that the UN Security Council imposed a new round of sanctions on Tehran, defence sources in the Gulf say that Riyadh has agreed to allow Israel to use a narrow corridor of its airspace in the north of the country to shorten the distance for a bombing run on Iran,” the Sunday Times reported on June 12. On June 14, the ambassador of Saudi Arabia to UK Prince Mohammed bin Nawaf issued a categorical denial of the report.

On June 17, Iran’s parliament warned it will respond in kind to inspection of its ships under a fourth round of sanctions imposed on the country by the UN Security Council. “Even if one Iranian ship is stopped for security-check, we will act likewise and thoroughly inspect any (western) ship passing through the Persian Gulf and the Strait of Hormuz,” member of the Iranian parliament’s National Security and Foreign Policy Commission Hossein Ebrahimi said.

Also on Saturday, Iran accused the United States of “deception” and insisted its missile program is for self-defense after a top U.S. official claimed that Iran had the capacity to attack Europe. “The Islamic Republic’s missile capability has been designed and implemented to defend against any military aggression and it does not threaten any nation,” Defense Minister Ahmad Vahidi HERE...said in a statement carried by state media.