BP oil disaster: How much oil is left? 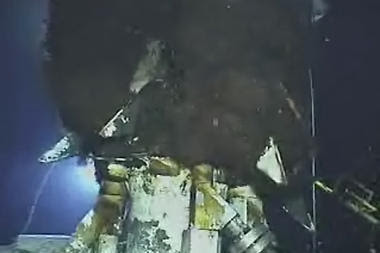 BP oil disaster: The underwater oil field still holds 94 to 97 percent of its oil, meaning that it could keep gushing for another two to four years.

BP CEO Tony Hayward says the reservoir that feeds the gushing well in the Gulf of Mexico probably still holds about 2 billion gallons of oil.

Appearing before a House subcommittee, Hayward estimated that the reservoir tapped by the out-of-control well holds at least 50 million barrels of oil. At 42 gallons per barrel, that's 2.1 billion gallons.

According to government estimates of daily flow figures, anywhere from 73.5 million to 126 million gallons gushed from the breached wellhead — whether into the water or captured.

That means the reservoir likely holds 94 to 97 percent of its oil. At the current flow rate, it would take from two to nearly four years for all the oil to leak from the field if it can't be stopped.

As I have already indicated in previous posts, the precise size of the Macondo Well is a closely guarded secret. CEO Tony Hayward is unlikely to have been honest and forthcoming in stating that the well originally held 50 million barrels. Oil Service insider's have indicated that it more than likely contained a minimum of 1 billion barrels and perhaps as much as 10 billion barrels in order for BP to have thought drilling the well made economic sense.

As University of Georgia researcher Samantha Joye see THIS... has indicated, it is impossible at this early stage to fully estimate the potential ramifications of the ecological disaster in the Gulf of Mexico. Until further scientific studies are carried out and until the original size of the oil deposit is known, it will be difficult to make appropriate projections and plans for what is likely to ensue. To date, the federal government and BP have failed to be transparent and open with the scientific community and the public and have refused to release the most important data.