BP PLC has concluded that its "top-kill" attempt to seal it's broken well in the Gulf of Mexico may have failed due to a malfunctioning disk inside the well about 1,000 feet below the ocean floor. 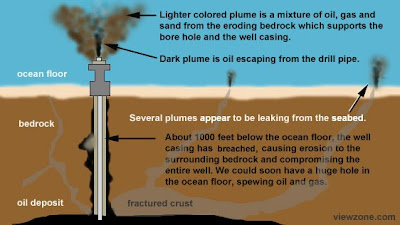 The broken disk may have prevented the heavy drilling mud injected into the well last week (several weeks ago now) from getting far enough down the well to overcome the pressure from the escaping oil and gas, people familiar with BP's findings said. They said much of the drilling mud may also have escaped from the well into the rock formation outside the wellbore. MORE...
Posted by Dr. J. P. Hubert at 2:24 PM