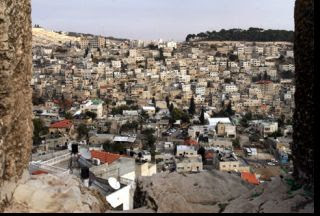 A view of the Silwan neighborhood in East al-Quds (Jerusalem)


The EU has expressed concern about an Israeli plan for the demolition of Palestinian homes in East al-Quds (Jerusalem), calling the move damaging for the Middle East peace process.

Under the controversial plan, 22 Palestinian homes in Silwan area will be destroyed to make way for a tourist park.

Jewish "settlements and the demolition of homes are illegal under international law, constitute an obstacle to peace and threaten to make a two-state solution impossible", Ashton said.

Her remarks came shortly after Richard Falk, the UN Special Rapporteur on the situation of human rights on Palestinian territories, warned that Israel's forcible transfer of Palestinians from their homes, demolitions and new Israeli settlements in al-Quds could amount to war crimes.

Israel occupied East Jerusalem during the 1967 war and annexed the area in 1981. Under international law the area is occupied territory.

Palestinians, who want al-Quds as the capital of their future state, say the project is another attempt by Tel Aviv to cement their claim to all of al-Quds.
Posted by Dr. J. P. Hubert at 8:28 AM