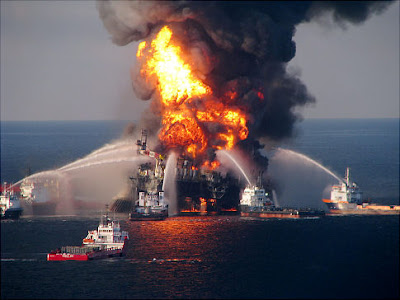 “The rig’s on fire! I told you this was gonna happen”

Top Houston attorney Tony Buzbee says he has new evidence which indicates that Deepwater Horizon’s managers knew that the BP oil rig had major problems before its explosion on April 20, citing the eyewitness account of a crew member who rescued burning workers on the rig of a conversation between Deepwater Horizon installation manager Jimmy Harrell and someone in Houston. According to the witness, Harrell was screaming, “Are you fucking happy? Are you fucking happy? The rig’s on fire! I told you this was gonna happen.”

Harrell was talking via satellite phone and whoever was on the other end of the line was apparently trying to calm him down as the rig burned.

“I am fucking calm,” said Harrell, according to Buzbee. “You realize the rig is burning?”

A boat captain then asked Harrell to leave the bridge. Transocean have refused to confirm or deny that the conversation took place.

Buzbee is a respected lawyer with a successful history of winning cases brought against oil companies. He represents 15 rig workers along with dozens of shrimpers, seafood restaurants, and dock workers. The witness to the conversation signed a 3 page statement attesting to the fact that it took place, but refuses to be identified for fear of reprisals.

Though Harrell himself has denied allegations of a feud with BP or Transocean in public hearings, the Atlantic’s Josh Harkinson points out that there were two other witnesses who personally experienced Harrell’s problems with their safety procedures.

“Testifying before the Coast Guard and MMS panel last month, Douglas Brown, the chief mechanic on the Deepwater Horizon, said that on the morning of the day that the rig exploded Harrell had a 'skirmish' over drilling procedures during a meeting with BP’s 'company man,' well site leader Robert Kaluza. “I remember the company man saying this is how it’s going to be,” Brown told the panel. As Harrell was leaving the meeting, according to Brown, “He pretty much grumbled, ‘I guess that’s what we have those pincers for,’” referring to the blowout preventer on the sea floor that is supposed to be the last resort to prevent a leak in the event of an emergency. The blowout preventer failed following the explosion on the rig, causing the massive spill. (Transocean’s chief electronics technician, Mike Williams, also recalled the argument but named a different BP 'company man,' BP’s top official on the rig, Donald Vidrine),” writes Harkinson.

“Other rig workers have also claimed that they were pressured by BP and their supervisors to cut corners,” adds Harkinson. “Transocean roustabout Truitt Crawford told the Coast Guard that he overheard senior management saying that BP was “taking shortcuts” by replacing drilling mud in the well with saltwater, which would have provided less weight to contain the well’s surging pressure. Transocean’s Williams told 60 Minutes that a supervisor had dismissed evidence that the well’s blowout preventer had been damaged. And workers with Halliburton, the well’s cementing contractor, had complained that BP’s use of cement 'was against our best practices' and told the oil company that it would likely have 'a SEVERE gas flow problem' unless the well’s casings were centered more carefully.

The details of this story would appear to point to mere negligence on behalf of Transocean and BP were it not for the plethora of other evidence indicating foreknowledge of the event and even possible deliberate sabotage of the oil well.

As we highlighted yesterday, on page 37 of British Petroleum’s own investigative report into the oil spill, it is stated that the Hydraulic Control System on equipment designed to automatically seal the well in an emergency was modified without BP’s knowledge sometime before the explosion.

Highly suspicious stock and share trades by people connected to BP before the explosion indicate some extent of foreknowledge.
Goldman Sachs dumped 44% of its shares in BP Oil during the first quarter of 2010 – shares that subsequently lost 36 percent of their value, equating to $96 million. The current chairman of Goldman Sachs is Bilderberg luminary Peter Sutherland, who is also the former chairman of British Petroleum.

Furthermore, as reported by the London Telegraph on June 5th, Tony Hayward, the current BP CEO sold £1.4 million of his shares in the fuel giant weeks before the spill. (Editor's bold emphasis)

Halliburton is named in the majority of some two dozen lawsuits filed since the explosion by Gulf Coast people and businesses who claim that the company is to blame for the disaster.

Halliburton was forced to admit in testimony at a congressional hearing last month that it carried out a cementing operation 20 hours before the Gulf of Mexico rig went up in flames. The lawsuits claim that four Halliburton workers stationed on the rig improperly capped the well.

Alex Jones discusses more of the evidence which indicates a cover-up and the potential motivations behind it in the clips below.

I have not independently varified the claims of Alex Jones that the Gulf Oil Leak is likely a "False Flag" attack and that BP and the Federal government are purposely not capping the leak. Nvertheless, his claims are worthy of further investigation.