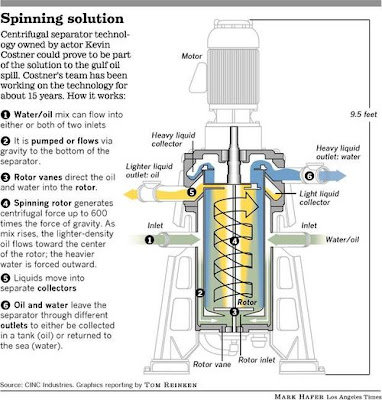 Actor Kevin Costner's oil-spill device has all the approval it needs to scoop the goop from the Gulf of Mexico, but is waiting for money from BP, according to the actor and his business partner.

BP has issued a letter of intent to buy 32 centrifugal oil-and-water separators, Costner said Thursday. His company, Ocean Therapy Solutions, was ramping up its operations to ship more than two dozen of the massive stainless steel machines to the Gulf of Mexico, he said.

“Kevin has spent 15 years and $24 million of his own money on this technology, and we have spent over $1 million more than that on adjusting the machines and preparing them for testing,” said Costner’s business partner, Louisiana attorney John Houghtaling. “We haven’t gotten a check yet from BP. The sooner it comes, the sooner we can act.”

Deployment of the 2½-ton machines had been delayed by rigorous testing requirements of BP and federal regulatory agencies, as well as engineering challenges posed by leaked oil that had degraded over time into gooey masses with the consistency of peanut butter, Costner said. MORE...
Posted by Dr. J. P. Hubert at 6:44 PM